The news is good on the ♥ front. 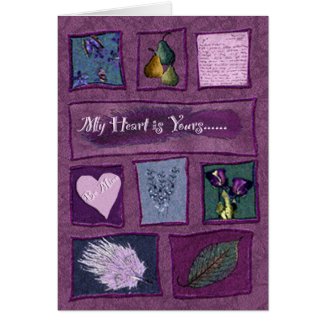 My Heart is Yours Card

The consultant at the hospital in Southampton (what a soulless place the town is) said that although the condition was serious, there was no need to put me through an operation just yet. He’s happy to have the heart checked every six months and go from there. The echocardiograms between last December and this week have shown that progress is slow. If any sign of increased deterioration is detected, the first thing they’ll do is try me on medication. The surgery will have to happen at some point but he hoped it would be a few years down the line.

I feel as though I’ve been holding my breath for six months and at last breathed out. In order to give me time to continue breathing out, you may find that my posts are not as regular as usual. I want to enjoy the summer (such as it is in the UK) and get out and about rather than pore over the computer and social media.

In between time, ain’t we got fun!

If you’re not aware of Ellen Hawley and her blog, Notes from the UK, you’re in for a treat. An American living in Cornwall, she casts her beady eye on the English — our laws, foibles, oddities and customs — in ways that will have you hooting with laughter. I’m re-blogging one of her recent posts partly so I can showcase my ducks. (Ellen talks about ducks, real and rubber) I say ‘my’ but they’re actually based at the duck pond within the grounds of the Isle of Wight hospital.

And now for Ellen’s musings —

‘People involved in British politics swear that politicians get elected (and unelected) mostly over potholes and garbage pickup, although it isn’t called garbage in Britain it’s called, um, somethin…’

Source: Of potholes and politics | Notes from the U.K.

58 thoughts on “First Night Design | Of potholes and politics, ducks and hospitals | Notes from the U.K.”